The ZAR movement that we have seen this week had little to do with local catalysts and more with external events. Most emerging market currencies have strengthened on the back of a weaker dollar. The dollar index was down to 95.9 on Wednesday (-0.7%), the lowest since the 10th of June as investors’ risk appetite improved. At the time of writing the Rand is currently trading at 16.66 to the USD and has gained 0.5% this week.

We saw a broad rally in risk assets on Wednesday, mainly due to progress being made towards a COVID-19 vaccine. The experimental vaccine made by the biotech company Moderna, has provoked promising immune responses against the virus in 45 volunteers. This was one of the first coronavirus vaccines to be tested in humans and the company did announce that large phase 3 tests would begin on the 27th of July, involving 30 000 people.

In the US, the Dow Jones continued to rise with the S&P 500 reaching a high of 3243, not far off the record high of 3393. This week the US banks kicked off earnings season and reported stronger than expected earnings which added to the positive market sentiment. Meanwhile, tensions between Washington and Beijing remains high, after President Donald Trump signed into law a bill to impose sanctions on Chinese officials.

Locally we had consumer inflation figures for May coming in at 2.1% year-on-year, from 3.0% in April and 4.1% in March. This is the lowest our price-growth has been in 16 years and means inflation has now fallen below the lower end of the Reserve’s Bank 3% to 6% target band. Analysts are divided on whether this will prompt the SARB to additional interest rate cuts. So far this year, the Reserve Bank has cut the lending rate by 275 basis points.

At the start of the week the Rand was trading in the mid-16.70s against the dollar and we did see some USD demand pushing us back up towards the 16.80 level, however the ZAR did manage to rally strongly and traded to a best level of 16.50 on Wednesday. On Thursday we did give up some ground as market sentiment was dampened by the intensifying tensions between the US and China as well as the release of disappointing Chinese consumption data.

Locally we also had the SARB publish its quarterly bulletin on Thursday, reporting a rise in our foreign direct investment (FDI) inflows in the first quarter of 2020, to R29 billion ($1.74 billion) compared to inflows of R10.5 billion in the final quarter of last year. This was mainly due to PepsiCo’s $1.7 billion takeover of the food and drinks producer Pioneer Food Group. The chart below shows the significant increase in South Africa’s net international investment position (IIP). 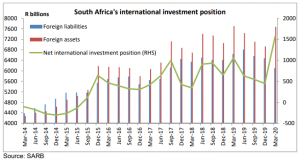 It is hard to tell whether these inflows have had any impact on the Rand, and we suspect that the recent bullish behaviour is most likely due to global market events. The chart below shows the Rand still trading within the recent bullish channel which started in mid-June.

“The reemergence of the virus cases, forcing governors to pause or reverse reopening plans have stalled out economic activity and risks the shape of the recovery being downgraded from a “V” to “U” or even the dreadful “L.” Also, a looming fiscal cliff risk crashing consumption as more than a quarter of all personal income is reliant on direct deposits from the government.”

“The trial will need to show that those who were vaccinated were significantly less likely to contract the virus than those who got a placebo. The fastest way to get results is to test the vaccine in a “hot spot” with many cases, and the study is looking for people at high risk because of their locations or circumstances.”

“In addition, the speed by which the inflation rate has moved from the midpoint of the target band to below the bottom of the band, notwithstanding the sizable interest cuts that the South African Reserve Bank has implemented, highlights the lack of growth and the need for growth in South Africa.”

“The analysis highlighted how the additional unemployment benefits are helping to prop up the U.S. economy and consumer spending after the pandemic led to a surge in joblessness across the country.”

“There was little doubt as to what “this” referred to — Donald Trump’s America — or who would be coming back. Biden, now running for president and ahead in opinion polls for November’s vote, might just have the opportunity to make good his pledge.”

Last week we wrote that “…we should not be trading down here…given our bias remains for a move weaker we struggle to understand why traders would be happy to push the ZAR stronger under current conditions. The possibility of load-shedding becoming an issue in the coming months only serves to increase our conviction that a pull-back is due.”

Despite the Rand never retreating weaker to trade within our forecast range for the past week, nothing has changed our view that we should not be this strong, and that the Rand should be weaker given the concerns about government’s ballooning debt, the impact of the coronavirus and now load shedding on an already weak economy. We expect the Rand to remain particularly volatile and our bias remains to the downside.